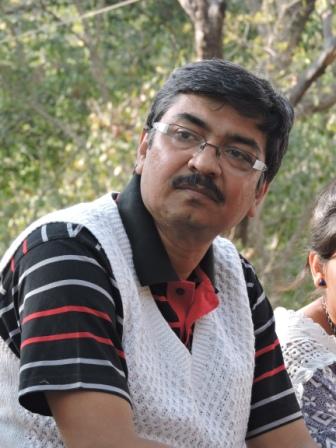 Born in 1969 and educated for his school at various places in Bihar, West Bengal and Gujarat, Sanjay S. Mukherjee went to the Maharaja Sayajirao University, Baroda, for his higher education in English Literature studying there under renowned teachers like Professors P.C. Kar, Ranu Vanikar and Ganesh Devy. He received his doctorate in 2003 from the Saurashtra University, Rajkot working on British Cultural Criticism under the guidance of the renowned scholar of Comparative Literature and Translation Studies, Professor Avadhesh Kumar Singh. Teaching for a year at an undergraduate college in the district of Baroda soon after completing his Master’s (where he topped his batch), he joined the postgraduate Department of English & Comparative Literary Studies at Saurashtra University, Rajkot as an ad hoc lecturer in 1996, and became a full-time faculty from 1998 where he is presently an Associate Professor. Dr. Mukherjee’s publications include two books: English Literature in the Romantic & Victorian Periods(1798-1914): Survey & Interpretation. Rajkot: Saurashtra University Press, 2006; and Critical Discourse and Colonialism (edited).New Delhi: Creative Books, 2005. He has around fifteen published articles and translations in various journals and magazines, along with half a dozen book reviews. He has been invited to speak at various universities within India, and among those from abroad has been invited from the University of British Columbia, Canada (at their Centre for Women’s and Gender Studies) in 2008. In 2011, he was awarded the Fulbright Fellowship in the SUSI category for an academic visit to the University of Louisville, Kentucky, U.S.A. He has guided five doctoral researches so far and five scholars are working currently under him for their Ph. Ds. He was also awarded with the Dolarrai Mankad Best Researcher’s Award, 2007 by the Saurashtra University, Rajkot.  He has been creatively active, though infrequently and received the First Prize in All India Poetry Contest organised by The Quest literary magazine in 1995; and his poem ‘Speaking of a Paradise’ received a special mention in the 5th Rabindranath Tagore International Award for Poetry in 2016. His academic areas of interest include Literary Criticism & Theory, Cultural Studies, British, American, Canadian and Indian (English) Poetry, Post-Independence Indian Writing in English, Translation, and Women’s Writing.